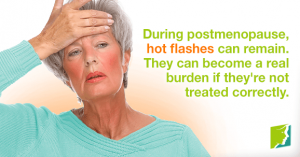 Menopause is a natural change in a woman’s life marking the end of her reproductive ability.

It occurs in the midlife of woman ranging from late 40 to early 50s.

Menopause is phase which occurs over a period of 4 to 5 years and described on the basis of the state of uterus and last menstrual cycle.

It involves hormonal changes and reduced activity of the ovaries.

Ova or female reproductive cells are no longer released by the ovaries and also production of hormones which cause menstrual flow is reduced.

Perimenopause is the transition period before and after the last menstrual cycle wherein a woman still faces symptoms associated with menopause due to erratic hormonal levels.

Postmenopause is the period after the final menstrual cycle, when a woman with an intact uterus and who isn’t pregnant or lactating has not experienced menses for a year.

Surgical menopause is loss of menstrual cycles due to removal of ovaries.

Menopause is not a disease and hence does not require any treatment; however one can look for ways to treat the symptoms.

Non hormonal medications and therapies can reduce symptoms and risks that occur with menopause.

Health benefits of Turmeric in Relation to Menopause

Turmeric is referred to as ‘The Golden Goddess’ not only for its golden hue and aromatic flavour but also for its healing properties.

Curcuminoids are a group of compounds that impart the vibrant yellow colour to the spice.

Curcumin is an active ingredient of this group which contributes significantly to the herb’s healing properties. Volatile oil is the extract obtained from the rhizome which is responsible for the aroma and therapeutic properties.

Turmeric serves to be therapeutic in various health disorders some of which are relevant to menopause. Following studies reflect this aspect.

1. Turmeric as a Phytoestrogen

Phytoestrogens are plant metabolites that mimic or modulate the activity of body estrogen.

Phytoestrogen supplements are always suggested as an alternative to hormone replacement therapy. Turmeric is a proven phytoestrogen.

Turmeric can prove to be helpful in these ailments as it can help elevate and balance estrogen levels.

What does this mean?  Turmeric is a natural source of estrogen available from plants which can help replenish the estrogen levels in your body and reduce the symptoms of menopause.

2. Turmeric as a Painkiller

Curcumin is effective in improving postoperative pain and fatigue, thus demonstrating its anti-inflammatory and analgesic activity.

Turmeric’s anti-inflammatory activity is comparable to that of painkillers like indomethacin and diclofenac sodium.

This property of turmeric can help to treat migraine, joint pain or muscle soreness caused by menopause.

What does this mean?  Body ache and muscle soreness are common complaints linked with menopause. Turmeric’s anti-inflammatory property can relieve you from such complaints.

It is a feeling of intense heat with sweating and rapid heartbeat.

Low levels of oestrogen are said to be responsible for this symptom.

An experimental study conducted on menopausal women reported that menopause and hot flushes bring about biochemical changes such as reduced antioxidant activity.

Turmeric’s antioxidant activity is as potent as that of Vitamin C and Vitamin E.

Turmeric is one of the dietary antioxidants that are suggested to be incorporated in menopausal women’s diet especially for those who can’t be treated with HRT.

What does this mean?  Good news for all women passing through this stage. Turmeric’s antioxidant activity and estrogen activity can prevent hot flashes.

4. Turmeric as an Antidepressant

Depressive symptoms are very common during perimenopause. Surprisingly low estrogen levels and depression have little or no correlation.

Researchers have analysed and confirmed that factors such as later-stage perimenopause, sleep disruption, current stress, and the presence of hot flashes are related to the depressive symptoms.

A clinical trial held in Government Medical College, Gujarat, India evaluated the safety and efficacy of curcumin as an antidepressant in comparison to fluoxetine or Prozac.

Results of this trial confirmed that curcumin has comparable antidepressant activities to that of fluoxetine but unlike other antidepressants, curcumin does not cause adverse effects.

Curcumin is also effective in controlling anxiety. Its anti-anxiety activity is comparable to diazepam.

It boosts DHA levels which are vital for controlling anxiety and essential for brain development and functioning.

What does this mean?  It is ok to be nervous, anxious or depressed in this phase. It’s your hormones at work. Surprisingly turmeric can help in dissipating your blues!

Postmenopausal age, decline in estrogen levels and vaginal atrophy can increase the susceptibility of women to vaginal infections.

These infections are characterized by vaginal discharge, soreness and itching in the genital area.

Turmeric is a natural anti-microbial agent.

Curcumin is proven to have synergistic effect with antibiotics when it comes to fighting drug resistant bacterial infection.

A clinical trial was conducted on 32 patients within the age group of 24-62 years who were suffering from vaginitis.

They were treated with a herbal topical formulation for 2 weeks and turmeric extracts was one of the main ingredients.

Anti-inflammatory, anti-bacterial and anti-fungal properties of turmeric were put to use.

Within 14 days of treatment patients experienced relief from all symptoms and tests conducted confirmed absence of infection.

What does this mean?  Turmeric can ward off vaginal infections.

Apart from the symptoms mentioned above, menopause and the period after that increases a women’s susceptibility to a number of disorders.

Aging is another factor that controls this aspect.

Compromised immunity is a matter of concern in postmenopausal women.

A review of 30 studies shows that decreased estrogen levels leads to reduced immunity and increases vulnerability to autoimmune diseases.

This increases incidence of diseases like diabetes, atherosclerosis and cardiovascular diseases.

Surgical menopause is also linked with impaired immune response and hormonal therapy can ameliorate this condition.

This suggests that turmeric as a phytoestrogen can also help in repairing immune responses.

However this is not the only attribute of the golden herb that can help in compromised immunity. Curcumin is an immune booster.

Those who have been brought up in a typical Indian family can now understand that this is the reason why your grandmother forced you to have turmeric milk when you had fever.

Curcumin has immunomodulating properties : It can reduce inflammation, migration of immune cells, and production of pro-inflammatory chemicals, all of which occur as a result of impaired immune responses leading to development of autoimmune diseases.

Interestingly at low levels, it can elevate immune and antibody responses and help fight infections.

What does this mean?  Turmeric can perfectly balance and restore your immunity, which could be compromised as result of estrogen imbalance.

8. It can help you shed off the extra pounds

The transition that occurs during menopause is not limited to hormones or bleeding or immunity alone. It also extends to body weight.

Body fat distribution is affected due to hormonal changes and deposition of fat tissue in abdominal region is a common outcome.

Studies suggest that hormonal replacement therapy can possibly reduce weight gain. But what if we suggest a healthier, tastier and safer option!?

Yes its turmeric. Curcumin mediates its anti-obesity effects in a number of ways:

What does this mean?  The golden herb can help in losing abdominal fat which is likely to occur as a result of menopause.

9. It is good for your heart

Post menopausal women are more likely to suffer from a heart attack than men.

Not only heart attacks, women are more predisposed to most heart problems than men.

Curcumin has a protective role in cardiovascular diseases.

Curcumin is one of the dietary polyphenols that is recommended for its beneficial effects on cardiovascular health and its protective action against aging.

Its anti-thrombotic, antioxidant and anti-inflammatory properties help in reducing the risk of atherosclerosis, heart failure and arrhythmia (irregular heartbeat).

Blood vessels tend to narrow down with age and lose elasticity.

This obstructs blood flow paving way to a number of heart problems such as heart attack and stroke.

A study conducted by a Japanese team has proven that curcumin supplements can improve blood flow and blood vessel functioning.

Results state that curcumin supplements can prove to be a good alternative for those who can’t exercise.

Curcumin ingestion when combined with exercise can reduce stress on heart in postmenopausal women which occurs if there is obstructed blood flow due narrowing of arteries.

Curcumin is beneficial for those who have suffered from heart attacks.

What does this mean?  Turmeric ingestion can reduce your risk of developing heart diseases in post-menopausal phase.

10. Turmeric can preserve your bone health

Estrogen is essential for bone formation.

Lack of estrogen can reduce bone formation which causes an imbalance between bone formation and absorption leading to weak bones. Weak bones are susceptible to fractures.

A study conducted in Korea has proven that bone loss caused by estrogen deficiency can be ameliorated by curcumin administration.

Findings suggest that curcumin increases bone density by virtue of its antioxidant property.

University of Arizona tested the protective effect of turmeric in a rat model of postmenopausal osteoporosis.

As mentioned previously, drop in female hormones leads to decreased immunity and this can lead to onset of rheumatoid arthritis.

Mixture of ginger and turmeric rhizomes is prove to be better than indomethacin (regular NSAID) in reducing arthritis linked inflammation and risk factors.

A different study proves that turmeric’s anti-arthritic potential exceeds that of ginger and indomethacin.

Due to this attribute turmeric prevents development of osteoarthritis.

What does this mean?  Aging and reduced oestrogen levels severely impacts bone health leading to development of osteoporosis, arthritis and osteoarthritis. Turmeric is potent enough to ameliorate any of these conditions and protect bone health.

11. It reduces your risk of developing breast cancer

Weight and levels of female hormones are two factors that control development of post-menopausal breast cancer.

Though this study did not test turmeric, it is a proven phytoestrogen.

Curcuminoids present in turmeric have anti-breast cancer effect and they inhibit development of breast cancer cells.

Due to numerous molecular mechanisms involved in turmeric’s anti-cancer effect, researchers suggest that curcumin should be give as an adjuvant to chemotherapeutic drugs in treating breast cancer.

A herbal formula (Zyflamend) containing a number of pant derived antioxidants one of them being curcumin is proven to reduce inflammation in breast cancer occurring a result of menopause.

Research proves that curcumin taken along with hormonal therapy can act as chemopreventive agent and reduce risk of developing breast cancer.

What does this mean?  Experimental studies prove that turmeric inhibits and destroys breast cancer cells. Additionally this herb can reduce your risk of developing breast cancer after menopause.

An important aspect of using turmeric is ensuring its absorption in body. This is easy to do so by taking turmeric with black pepper or fats.

Both fats and black pepper enhance turmeric’s absorption which is otherwise very low.

Two ways to include turmeric as part of life are: 1) Golden milk (recipe here) and 2) Golden paste (recipe here)

Turmeric supplements can be more convenient, are more potent, and are what was used in almost all research that studied turmeric.

No adverse effects have been reported on consumption of turmeric in regular diet.

However turmeric supplements should be consumed with caution to avoid allergic reactions and risks posed by inappropriate dosage.

Conditions in which turmeric supplements should be avoided or are to be taken with care are as follows:

Menopause is a part of a natural cycle of woman’s life. It is not a disease that needs to be cured.

Hormone replacement therapy is one of the solutions most women resort to so as to reduce the symptoms of menopause. However HRT is a double edged sword that makes women prone to risks and complications of menopause.

Turmeric’s numerous healing properties can be of aid to deal with this phase of life.

On an average women spend one third of their life in the post-menopause phase. Turmeric’s healing properties are not limited to menopausal women but those who are soon to enter this stage of life can make it a ritual to start taking turmeric this very moment.

Turmeric can definitely be the one remedy that reduces your discomfort during menopause.